How To Trade The Fed: Indicators to Keep an Eye on

You can’t fight the Federal Reserve, but at the rate things change today, that doesn't mean you should bury your head in the sand. Fed indicators matter, too. 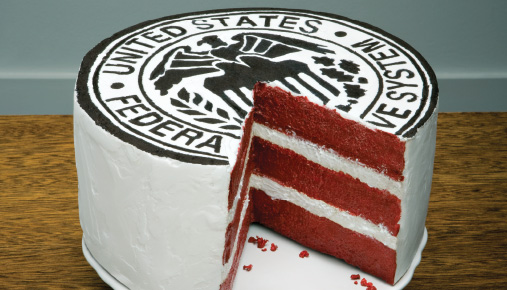 Few traders would disagree that stock markets have dramatically changed in the last two years since the credit crisis began to unfold in earnest. And the rally off the March 2009 bottom that peaked in April 2010 was also very different. How so?

For starters, never before in history has so much money been pumped into global markets by central banks in the U.S. and around the globe in an effort to re-inflate economies. Stock markets have been the early major beneficiaries from this tsunami of cash.

So what factors are at work this time, and how can knowledge of what the Fed is doing help traders?

Looking at the chart in Figure 1, there is an interesting inverse relationship between stocks and interest rates. In good economic times, rates generally rise as the economy gathers momentum. As it starts to overheat, rates are pushed even higher in an attempt to control inflation. 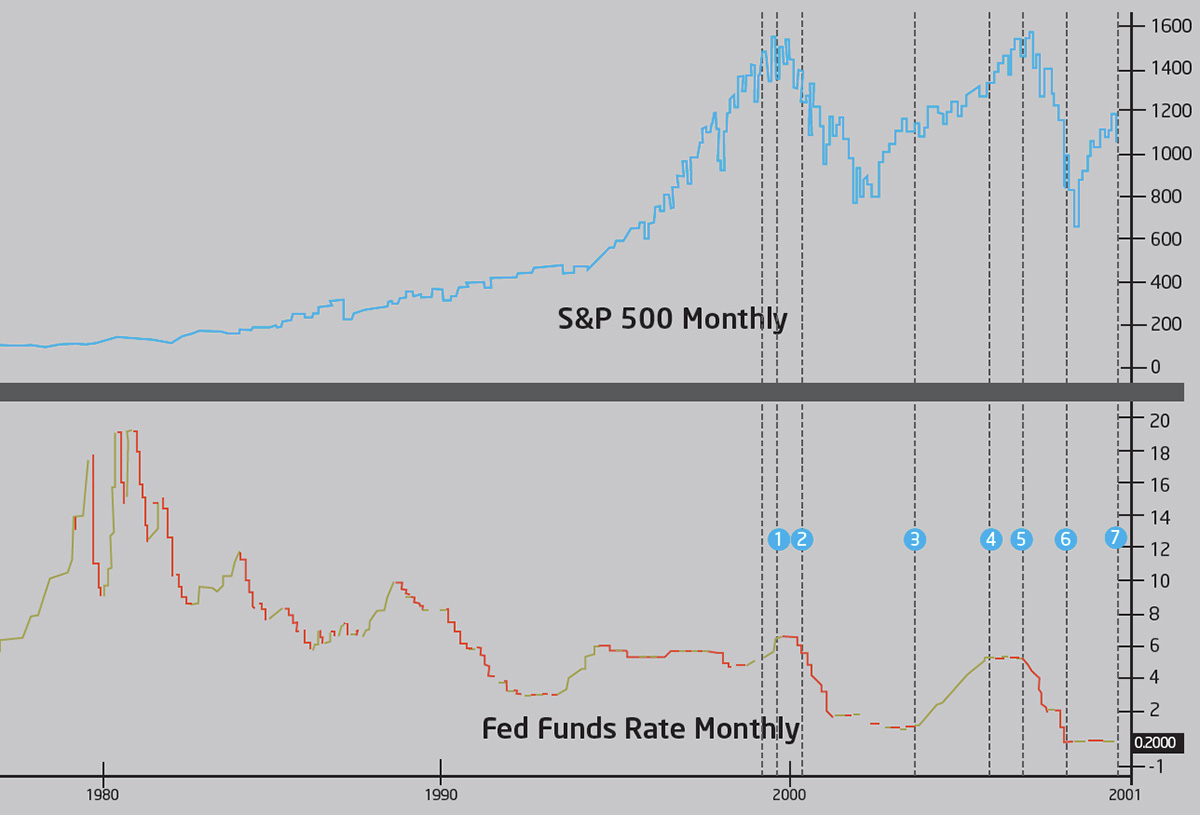 Monthly chart of the S&P 500 Index and the Fed funds rate, which remained near zero at 0.013% in March. Note numbers 1 through 6 on the lower chart, which we’ll discuss in detail. It is also interesting to note that the Fed funds rate was lower in February than at any time in the last 60 years. Source: MetaStock by Thomson Reuters. For illustrative purposes only.

How Is It Different this Time?

But during the last recession (2001-02), the Fed decided to leave rates low (around 1 %) for more than a year after the stock rally started. Their plan was to ensure the economic recovery (and stock market rally) would not be derailed by the rising cost of money.

What happens when lowering interest rates doesn't have the intended effect on the economy? Even after dropping the Fed funds rate to nearly zero in November 2008 (point 6), the economy was still deteriorating (and stocks were still falling). In an attempt to counteract this drop, the Fed began pumping more money into the economy in unprecedented amounts, which caused the sum total of money in circulation (as measured by the adjusted monetary base) to more than double in a few short months (Figure 2). It was step two in what is euphemistically called the “quantitative easing program.” 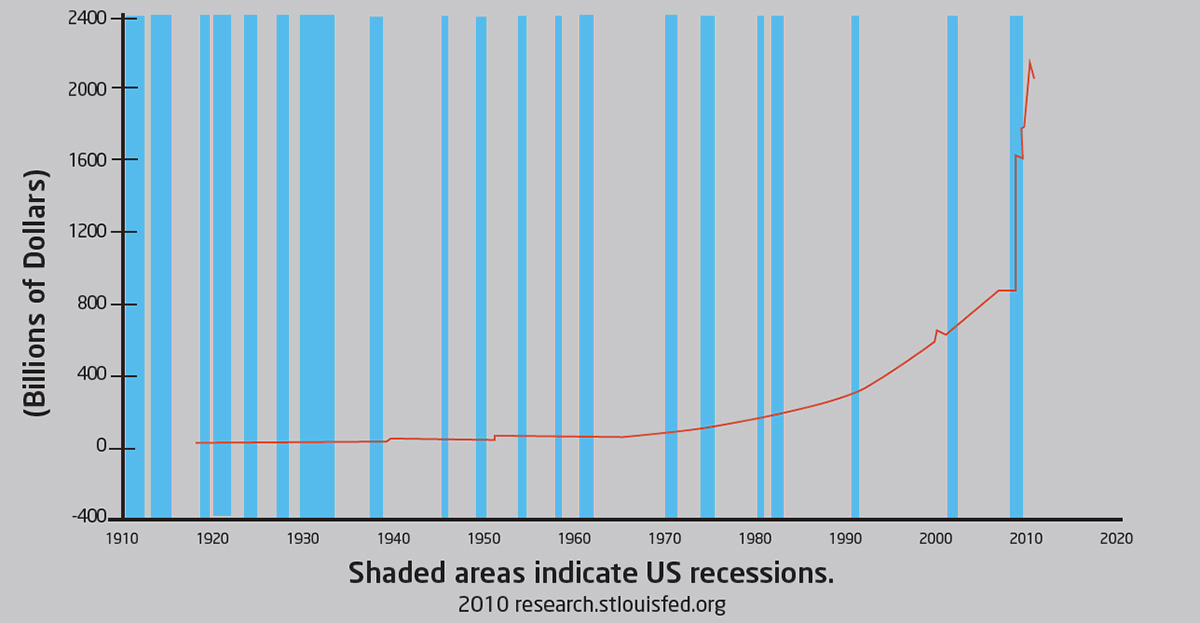 The Federal Reserve’s chart showing the adjusted monetary base (monthly). Since the beginning of 2009, the year-over-year increase in the money in circulation has averaged 76%. Since August 2008, when the adjusted money base began to expand in earnest, money in circulation has grown a whopping 146%. Source: Federal Reserve Bank of St. Louis. For illustrative purposes only.

What's important to understand is that quantitative easing is nothing more than money creation. And the Fed has two tools at its disposal to accomplish this: (1) One way to create money is by lowering interest rates, which makes loans cheaper and encourages investment, borrowing, and consumer spending. And (2) when this fails to work, the Fed can add more cash to the system by going to the printing press.

This is exactly the position in which the Fed now finds itself—stuck between a zero interest rates rock and a weak economic hard place (see point 7, Figure 1).

As Figure 2 shows, since the 1970s, the money in circulation as indicated by the adjusted monetary base (AMB) has grown at an increasing rate. In September 2008, when it became obvious that lower rates alone would not be enough to combat the problem, the Fed began to increase the AMB. By January 2009, the AMB had more than doubled on a year-over-year basis. By March 2010, it was up 146 % as the Fed struggled to find new ways to boost the economy.

An overnight rate near zero and more than double the money in circulation (two powerful quantitative easing tools) are inflationary, and stocks have responded with a vengeance since March 2009. As long as the U.S. Treasury can continue to sell unprecedented amounts of bonds to pay the rapidly growing debt bills, rates could remain low for months and even years, and stocks have the potential to enjoy this powerful Fed-sponsored lift.

Eyes on the Reserve

So, what indicators can traders use to help measure this push?

1. Fed funds rate. Otherwise known as interest rates, this is what media heads are referring to; though the Fed, through its Federal Open Market Committee (FOMC), merely sets “targets,” not the actual rate. The rate itself is determined by the open market. As long as the fed funds rate remains low, stocks will enjoy a tailwind. The Fed funds target rate changes monthly and is published by the Fed. The effective Fed funds rate changes daily.

2. Money supply, and more specifically, the adjusted monetary base.

These statistics will tell you when the Fed is increasing or decreasing the money in circulation. When more money is put into circulation, it initially can have a positive impact on stocks because there is more money out there to invest. The problem is that if this continues for too long, it begins to cause inflation, which means interest rates will eventually have to rise—a situation that is generally bad for stocks. The Fed can also reduce the money in circulation, but this is relatively rare. Still, it should be tracked carefully, as it can warn of a weakening environment for stocks. This data is published biweekly.

3. M1 multiplier. This statistic tells us how effectively money is circulating in the economy. It dropped below 1 in December 2008 for the first time since records have been kept thanks to the recent explosion in the adjusted monetary base. This trend is cause for concern since it means money is not being used as effectively to power our economy (and thus the stock markets).

You've probably heard the phrase, “Never fight the Fed.” As many have learned the hard way (particularly traders), stepping in front of the Federal Reserve to trade can be a painful experience. So, until the day comes that the Fed no longer controls interest rates and money supply mechanisms, traders should follow agency actions carefully to pick up clues on where stocks may be headed.