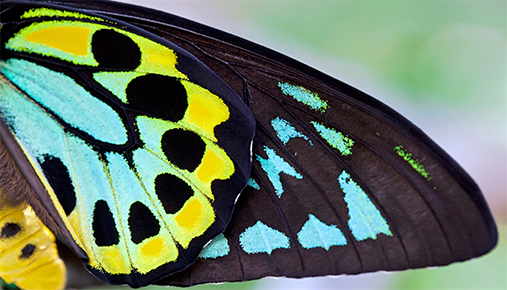 Commodities flutter and real estate stocks react, sometimes in unexpected locales. That means intermarket analysis and broad ETFs can be an important piece of your investing approach.

In the movie Jurassic Park, actor Jeff Goldblum enlightens viewers on the “butterfly effect,” the phenomenon whereby a small change at one place in a complex system can have significant effects elsewhere. “A butterfly can flap its wings in Peking and in Central Park you get rain instead of sunshine,” Goldblum’s character warns. Ray Bradbury lovers will recall a similar theme in A Sound of Thunder, where one stray step from the trail by time-traveling hunters could change the future forever.

No matter the source, there’s a lesson here for investors: if you learn how global economies, global markets, and typical market cycles interlace, you can trace much of the cause and effect that moves investments. Researchers call it “intermarket analysis” and it can be an important piece of a diverse investing approach. Armed with such knowledge, you might participate in big market moves in places you might have otherwise ignored, or hop on trends because you anticipate a ripple effect. Further, you might preemptively hedge your holdings against downturns. What’s new, however, is that the proliferation of exchange-traded funds (ETFs) to help investors capture global markets makes such research possible for self-directed traders and investors. In fact, your decision to trade or not to trade ETFs doesn’t preclude their use as a globe-trekking, cross-market tool. More on which ETFs may be candidates to get the researcher’s job done later.

First, we’ll study the relationships between the main asset classes: stocks, bonds, currencies, and commodities, including determining which correlate under typical circumstances and which “decouple.”

Generally speaking, correlation breaks down like this: commodities are a tangible good that must be purchased with currency and so with global exchange rates compared to the “reserve” U.S. dollar, there’s often a negative correlation between currencies and commodities. Consider that a firmer dollar makes commodities more expensive so they’re likely to be less desirable. When commodities and currencies move, so do interest rates, which are in effect the “cost” of money. Higher commodity prices tend to be considered inflationary so interest rates rise to compensate. This means commodities and interest rates tend to move in the same direction (remember: bond prices and interest rates move opposite one another). Short-term stock and bond prices usually decouple because they compete for investor demand yet longer term, it’s a different story, as falling interest rates can be pro-expansion to a point after which they again become inflationary.

In the early 1980s, gold hit a major price top, as did all commodities, but as their run-up fizzled (popped one might say, if we’re talking about bubbles), Treasury yields peaked at 16% before pulling back. Stocks kicked off a bull run that stretched from 1982 until 2000 when Internet stocks deflated and tugged the broader market down. From there, the U.S. dollar declined and gold rallied anew. Now, consider this global example: if gold beats its wings and surges in price, where might the market move to take advantage of rising values?

Beyond simply investing in a single gold-mining stock or a group of gold stocks via an ETF, there are other mutual funds or ETFs that might be considered versus more-expensive gold. For instance, Australia and South Africa derive much of their Gross Domestic Product from precious metals. The takeaway: the price of gold tends to be positively correlated with currency ETFs from these countries. And that relationship might further trickle to other sectors of their economy such as real estate, or to the economies of smaller, neighboring trade partners like New Zealand. Keep in mind, the inverse could happen if gold goes south.

It’s a lot to take in. Stick with me!

The good news? There’s a veritable “cheat sheet” to help keep track of intermarket directional trade or trends, including market-versus-market, and region-versus-region, comparisons. For instance, let’s look at a basket of ETFs as a research tool. Simply follow and chart some major symbols to collect more nuggets of market intelligence (you can decide conclusively about trading ETFs another time).

You might consider this collection of intermarket tickers your nature-watching tools. They might help you identify the moment the wings flutter. How you prepare for what’s next is up to you.

Editor’s Note: This article was originally published in August 2013.

Carefully consider the investment objectives, risks, charges, and expenses of an exchange traded fund before investing. A prospectus, obtained by calling 800-669-3900, contains this and other important information about an investment company. Read carefully before investing.

Use a screener to narrow the field of ETFs that might best fit your goals at TD Ameritrade's ETFs Market Center. Pre-defined and custom screens can help you filter through sector funds, target-date funds, bear-market funds, and more.

Risks of Commodity ETFs: Commodity ETFs may be affected by changes in overall market movements, commodity index volatility, changes in interest rates or factors affecting a particular industry or commodity. Commodity ETFs may be subject to greater volatility than traditional ETFs and may not be suitable for all investors. Unique risk factors of a commodity fund may include, but are not limited to the fund’s use of aggressive investment techniques such as derivatives, options, forward contracts, correlation or inverse correlation, market price variance risk and leverage.

Risks of Currency ETFs: The value of the shares of a currency exchange traded product relates directly to the value of the foreign currency held by the particular product. This creates a concentration risk associated with fluctuations in the price of the applicable foreign currency. Unique risk factors of a foreign currency include national debt levels and trade deficits, domestic and foreign inflation rates, domestic and foreign interest rates, investment and trading activities of institutions and global or regional political, economic or financial events and situations. Currency products may not be suitable for all investors. Many currency products are not investment companies registered under the Investment Company Act of 1940. For a more complete discussion of risk factors applicable to each currency product, carefully read the particular product’s prospectus.

Real Estate Investment Trusts/Direct Participation Program securities are generally illiquid securities. The current value may be different than its purchase price. Accurate valuation information may not be readily available. In addition, the value may not be realizable if you seek to liquidate the security.