Inflation-proofing a portfolio is about allowing growth investments to take advantage of an economy that tips toward inflation while buffering income-generating portions from inflation’s bite. 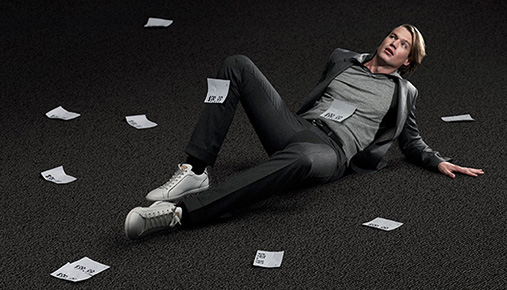 When’s the best time to think about inflation? Right now—when it’s not chewing your portfolio to shreds. Few economists predict a repeat of 1970s-style inflation. But learning how to sniff out inflation early can help fortify a portfolio well in advance of this party crasher.

Inflation—the word that means stuff is getting more expensive—doesn’t have to be scary. Hyperinflation is scary. We had something like that in 1979, not today. And even though the consensus is that prices are in check for the foreseeable future, there’s a risk that we’ve grown too comfortable with the type of tame inflation the U.S. has seen for some time now. So the question is, are we agile enough to respond to any renewed acceleration in prices for food, clothing, and other necessities?

For investors, one key is to position the growth area of your portfolio to take advantage of an economy that may tip toward inflationary growth, while buffering your income portions from the deleterious effects of inflation.

Think of inflation as a water spigot. It’s rarely cranked right and tight, but, at least in the U.S. and in most developed economies, it’s seldom at full pressure. Part of the Federal Reserve’s job is to try to control the “flow” through interest rate policy and money supply.

The traditional inflation gauge in the U.S. is the Consumer Price Index (CPI), which is updated every month by the Labor Department and reflects average price changes over time for a basket of goods and services: food, gasoline, rent, apparel, medical care, etc.

Each month, Labor Department data collectors call or visit thousands of retail stores, service providers, rental units, and doctors’ offices all over the U.S., recording prices of about 80,000 items that represent a scientifically selected sample of what Americans purchase.

The Fed tries to keep inflation around a 2% annual target by making adjustments to its benchmark funds rate, which affects rates on bank loans, credit cards and other things involved in the “flow” of money in the economy.

There’s another inflation measure watched by Fed economists: the personal consumption expenditures (PCE) deflator. The Fed reportedly favors PCE because it accounts for goods and services “substitution,” includes a broader basket of prices, and its historical data is more easily revised.

Inflation reduces the dollar’s purchasing power. It’s why the buck you had in your pocket in 1994 only buys you about 63 cents’ worth of whatever today. This can sour a retirement when you’re relying on portfolio income to sustain your lifestyle and you need returns to at least outpace inflation. “Inflation is always a source of risk for investors,” said James Marple, Senior Economist with TD Bank Group. “A steep rise in inflation will lead to large capital losses on bond portfolios.”

For stocks, it’s a little different. Rising inflation and stock and commodity prices generally move in step because the stronger economic growth that’s generating inflation is a boon to share values and commodities demand— up to a certain point.

If it gets out of hand, however, inflation eventually becomes detrimental to the economy, and stocks can suffer along with everything else. If your memories of the late ’70s extend beyond a recent viewing of Argo, you probably know what we’re talking about. Amid soaring oil prices and tensions in the Middle East, U.S. consumer prices surged over 10% annually from 1979–81. It took some serious tough love from the Fed (specifically, major rate hikes) to get matters under control, and a deep recession was part of the cost. In more recent years, annual inflation has only occasionally crept above 2% (see figure 1).

Higher inflation—or the expectation of higher inflation—leads to higher interest rates (and lower bond values). That hurts stocks eventually, too, because the cost of doing business goes up. Sometimes the pressure is anticipatory. That is, when consumers expect things to cost more in the future, they often put less value on their financial assets, and the prices of those financial assets fall. Commodity values may hold in there a little longer in this scenario. 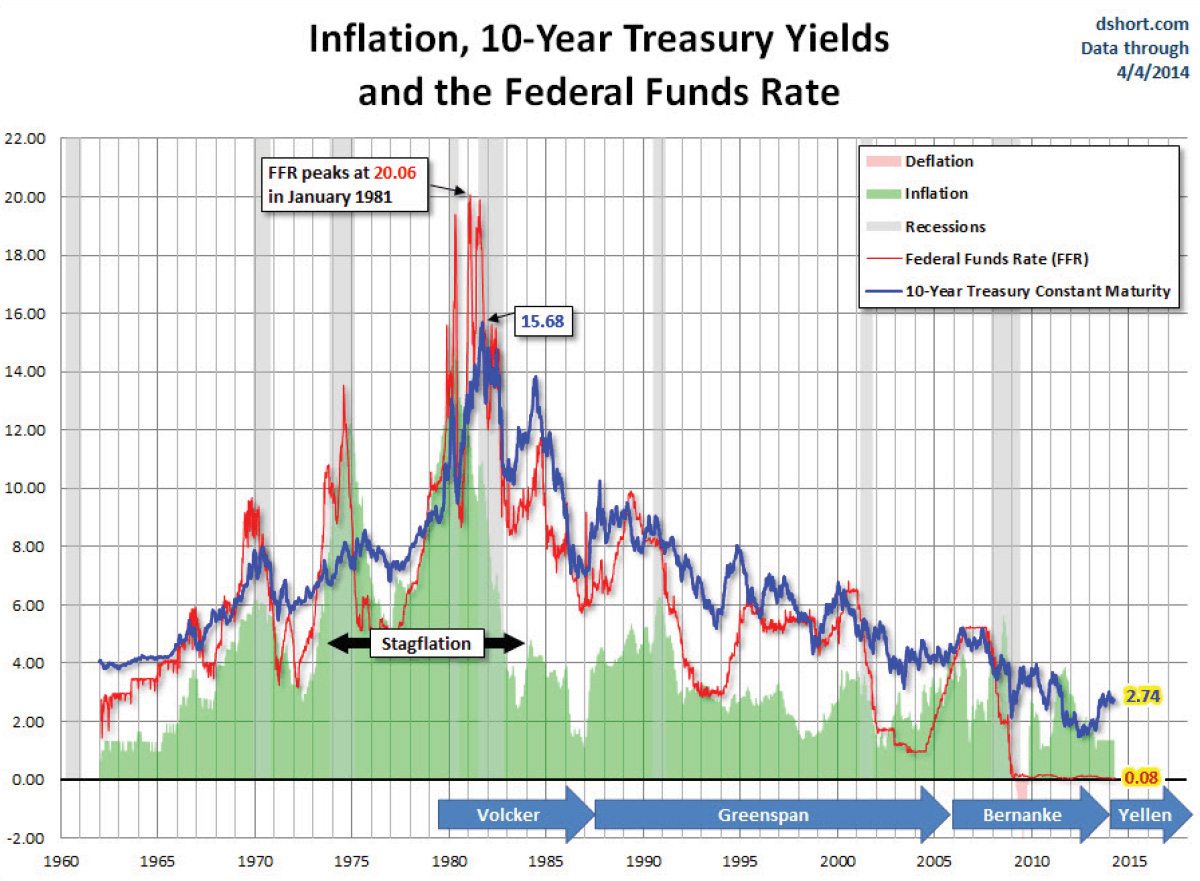 FIGURE 1: QUICK HISTORY LESSON. In the early 1980s, Paul Volcker, then the Fed chairman, hiked the central banks benchmark rate (red line) to 20% t get soaring inflation (green) under control. Since then, rates for 10-year Treasuries (blue) and other fixed-income instruments moved lower and lower. Source: AdvisorPerspectives.com, the Federal Reserve. For illustrative purposes only.

It can be tricky to separate near-term economic uncertainty from your longer-term plans. Investment returns must first keep up with the rate of inflation—no matter how modest—in order to increase real purchasing power. For example, an investment that returns 2% before inflation when the Consumer Price Index (CPI) is rising at a 3% clip will actually produce a negative return (-1%) when adjusted for inflation.

With interest rates still low, shorter or intermediate-term bonds may be worth considering for the fixed-income part of your portfolio, even if you have to accept a lower current return. If inflation increases and bond prices drop, owning shorter-term bonds can be a mitigating factor.

One strategy that seeks to reduce the impact of rising inflation on bond holdings is to build a bond “ladder”—buying bonds that mature in two, four, six, eight, and 10 years, for example. As the shorter-term bonds mature, investors can reinvest the proceeds into longer-term bonds at higher rates. Typically, a bond ladder might fit best for an investor who doesn’t mind holding them for up to 10 years. Inflation-linked bonds seek to offer protection from inflation, but these instruments make up a smaller share of the overall bond market and are somewhat less liquid.

Off to See the Wizard

Interested in readymade bond or CD ladders, or want to learn how to build your own? The Bond Wizard from TD Ameritrade can help.

It’s not all bad news: Stocks have previously been a good investment for some, relative to inflation over the very long term, because companies can raise prices for their products when their costs increase. However, over shorter periods, stocks can certainly react negatively to sudden or unexpected rises in inflation.

Such moves can heighten uncertainty about the economy, leading to lower earnings forecasts for companies and lower equity prices. An “inflation scare” would be particularly damaging to high-yield bonds, as expectations for monetary tightening can increase default fears.

The good news in all of this is that economists generally believe inflation in coming years will stay under control, with little risk of any broad, runaway price increases such as what the U.S. experienced in the 1970s. Marple estimates the CPI will rise about 1.9% this year, increase 2% in 2015 and climb 2.2% from 2016–18.

Try to have realistic expectations about inflation and the need for your portfolio to adjust accordingly. Inflation is more likely to rise than fall in coming years, and while occasional price spikes won’t necessarily alter Fed rate policy or derail the economy, that doesn’t mean your retirement stash won’t get dinged up. Some of your costs, such as healthcare, will increase as you age. That’s right, inflation can be personal.

Caution Ahead? Five Warning Signs a Stock Might Not Be a Good Buy 5 min read Election-Year Investing: Positioning Your Portfolio for the Upcoming 2020 Election 5 min read As Brokers Abandon Commissions, Don’t Abandon Caution in Your Portfolio 5 min read

The information contained in this article is not intended to be individual investment advice and is for educational and illustrative purposes only. Be sure to understand all risks involved with each strategy, including commission costs, before attempting to place any trade. Clients must consider all relevant risk factors, including their own personal financial situations, before trading and please remember, past performance of an investment does not guarantee future results or success.

TD Ameritrade may act as principal on any fixed-income transaction. When acting as principal, we will add a markup to any purchase, and subtract a markdown from every sale. This markup or markdown will be included in the price quoted to you.

Results generated by Bond Wizard are based on your entered criteria and represent possible investment alternatives available at the time the list is compiled. The results should not be considered a recommendation or solicitation by TD Ameritrade to purchase any specific securities. You are responsible for determining whether any particular investment is consistent with your investment objectives, risk tolerance, and financial circumstances. You may want to consult an attorney or tax professional regarding the bonds you select for your portfolio prior to purchasing them.

TD Ameritrade is not responsible for ensuring that your use of Bond Wizard or Bond Ladder tool is suitable for your specific financial situation.