Where’s the beef? Once exclusive to steakhouses, prime-grade beef is appearing in higher-end supermarkets and online. You can try some right at home. 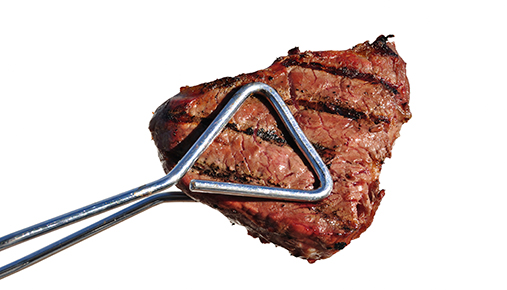 The palate-pleasing filet mignon that once came only from a steakhouse is more and more available right at home—if you know how to get it.

Prime-grade beef is appearing in higher-end supermarkets like Whole Foods (WFM), Wegmans, and even Costco (COST).

But is it the same as in a steakhouse? Yes and no.

Here’s How It Starts

At the slaughterhouse, a USDA inspector awards the prime grade if there’s enough intramuscular fat cells in the rib eye, specifically between the 12th and 13th ribs. The entire beef carcass then is graded prime, explains Narciso Perez, director of cattle at Zia Agricultural Consulting, who raises prime cattle.

Bruce Longo, beef reporter for Urner Barry, which tracks protein prices, said more ranchers are growing these prized cattle because feed prices are low, so they’re going for higher margins. There’s more focus on genetics and science-based diets. That means a few more prime-grade cuts can make it to high-end grocers, but supply is still low, as only about 4% of all cattle grade as prime.

Much effort goes into raising these cattle, Perez says. Only certain breeds, including the Red Angus he raises, have the genetics to allow the intramuscular fat cells to plump up properly. It’s those fat cells in the muscle that make the steak juicy and flavorful, he says.

And that takes time. Perez said it may take a couple of years to raise prime cattle, and that’s under specific conditions.

“You want to create the atmosphere as perfect as possible. In order to be able to reach their genetic potential they have to have a very happy, balanced life,” he says.

For some folks, there’s no place like home. But while diners can buy prime beef at better grocers, it may not be the same “eating experience” as at a steakhouse, says John Kleist, director of research with brokerage firm EBOT Trading. Why?

“It’s the aging process that makes the difference,” according to Kleist. “Aged beef can be cost-prohibitive at the retail level.”

Steakhouse beef is often aged 30 to 60 days to break down the fibers, making the meat fork-tender. Most grocery chains don’t have the space to let the beef age, he said.

Your Butcher Is Your Friend

Carnivores who want aged prime beef outside of a steakhouse have a few options.

Zino said for the best at-home eating experience of an aged prime steak, just season it with salt and pepper, cook it to medium rare over a charcoal grill or in a pan, sear it on both sides, and use tongs to flip the meat.