Election Pt 2: What a White House Democrat Could Mean for Stocks

History shows that Democrats have been kind to stocks. Surprised? Find out which stock sectors stand to improve under a Democratic president. 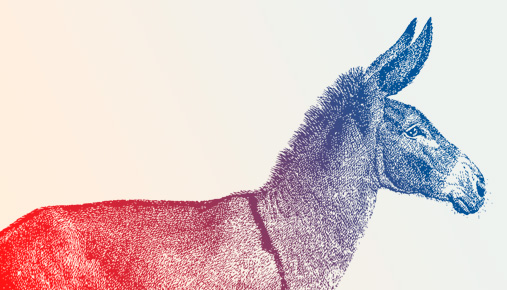 Editor’s note: This is the second in a three-part series on the presidential cycle and the 2016 election’s impact on the stock market. Read part one.

Quick quiz: Are donkeys or elephants better for the stock market? It may surprise some investors to learn that the broader stock market’s historical performance has been stronger under a White House Democrat versus the typically “pro-business” Republican eras.

As for specific sectors, the political affiliation of the man (or woman?) in charge can matter for the type of company and its business drivers—for instance, growth stocks compared to defensive sectors.

But first, those broad numbers. Since World War II, Democratic presidencies averaged an 11.2% gain in the S&P 500 (SPX) versus a 6.3% gain for stocks under Republican rule, according to Sam Stovall, managing director for U.S. equity strategy at S&P Capital IQ.

Some analysts pin the stronger stock returns to “big spending” Democratic policies, which have tended to translate into more vigorous economic growth, higher levels of consumer spending, and in turn, healthier corporate profits.

No matter whom you plan to vote for, all investors have a vested interest in Wall Street and the White House. What stock sectors could potentially benefit if a Democrat retains control of the presidency in 2016? (Don’t worry: We’ll follow up with typically GOP-friendly sectors in part three.)

Although traditionally thought of as a defensive sector, health care stocks have gotten a boost from the passage of the Affordable Care Act (ACA) after some bumps while the industry adapted to the new rules. But in its simplest terms, the ACA brought more Americans onto the health care insurance rolls, which translates into increased demand across the health care sector. Political analysts expect that a Democrat in the White House for four more years would keep the ACA, or some variation, in place and possibly expand health care initiatives, which could prove supportive for this sector.

Education companies. The trend toward for-profit education companies has grown in recent years. Many post-secondary education service providers—complete with tradable tickers—now dot the investing landscape. These companies and their shares have come under fire for reporting standards and have raised bigger sociological questions about for-profit education versus not-for-profit and largely tax-funded education. Nonetheless, it’s a trend that’s not about to fade. A Democrat in the White House in 2016 could inject fresh capital via increased federal grants, loans, and spending toward the education and training sector, which could bolster demand for these for-profit education firms.

Alternative energy. While Republicans may traditionally be the champions of oil and coal companies, Democrats are seen as favoring alternative energy sources or so-called green and clean energy. Of course, this issue could remain a topic that helps differentiate candidates, as even select GOP candidates are divided in their perspective on the future of U.S. energy. But as for stocks, think windmills, solar, geothermal, electric cars, and so on.

The landscape is growing. Population growth forecasts for the years ahead suggest energy demands will continue to climb. Sure, crude oil is cheap now, but commodities always seem to move in boom-and-bust cycles. There are plenty of renewable energy companies for investors to research. That research might include candidate positions, too. Energy issues tend to cross political boundaries.

Control of the White House matters, but don't forget that party control of Congress can either support or stall a president's priorities and agenda. The balance of power will be an important consideration when it comes to stock sectors that could gain a boost after all the votes are counted.

Part three of this election series takes on Republicans and affected stock sectors.