RV sales are growing as the economy recovers, gas is cheap, and baby boomers hit the open road. Learn which companies are benefiting from this trend. 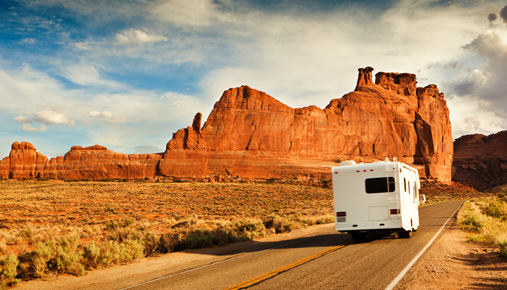 In the 1985 comedy Lost in America, Albert Brooks and Julie Hagerty quit their L.A. jobs and buy a Winnebago with the plan to drive cross-country. They may have been on to something, as RV sales are surging.

Recent data from the Recreation Vehicle Industry Association shows wholesale shipments to retailers of all RVs in June rose 18.7% above June 2015 and were up 10.9% over May figures. Additionally, the group said, June’s totals pushed year-to-date RV wholesale shipments to 226,286 units, representing an 11.7% increase over the same period last year, with the six-month total this year the best since 1977.

Baby boomers are the biggest buyers of RVs, the association said, but they noted that people between 35 and 54 are the fastest-growing demographic of owners, not unlike the 30-something Brooks and Hagerty of the film.

In a statement for their third-quarter earnings, Bob Martin, chief executive officer for Thor Industries (THO), echoed the association’s findings.

"We have heard consistent feedback that our dealer partners are seeing an influx of younger consumers entering our markets, which gives us optimism for the long-term growth of our business and industry," Martin said in a statement.

While most people probably aren’t quitting their jobs and hitting the open road, persistently low gas prices and a healing economy are also factors behind the rise in RV sales.

With crude oil prices ranging between $40 and $50 a barrel, oil costs remain roughly half of what they were as recently as June 2014.

Campers themselves are becoming more diverse, too. A study from private campground group Kampgrounds of America (KOA) showed the percentage of Asian Americans, African Americans, and Hispanic Americans who are investing in the camping lifestyle has doubled in the past three years, accounting for one in four campers.

Not surprisingly, share prices of publicly traded companies that manufacture RVs have been doing well, reflecting the trend in RV sales. For example, THO’s Q3 earnings beat expectations, posting earnings of $1.51 per share versus analyst estimates of $1.43 per share. Revenue increased by 9.4% to $1.28 billion from last year.

With strong sales, a positive outlook, and expanding demographics, the RV industry might help motor a portfolio.

Want to learn more about stocks in the travel sector? Screener tools can help you find and put stocks to the test before you hit the road.