A new $2 trillion infrastructure plan is making its way through Washington, leading many investors to seek new opportunities. But which sectors will get a boost? 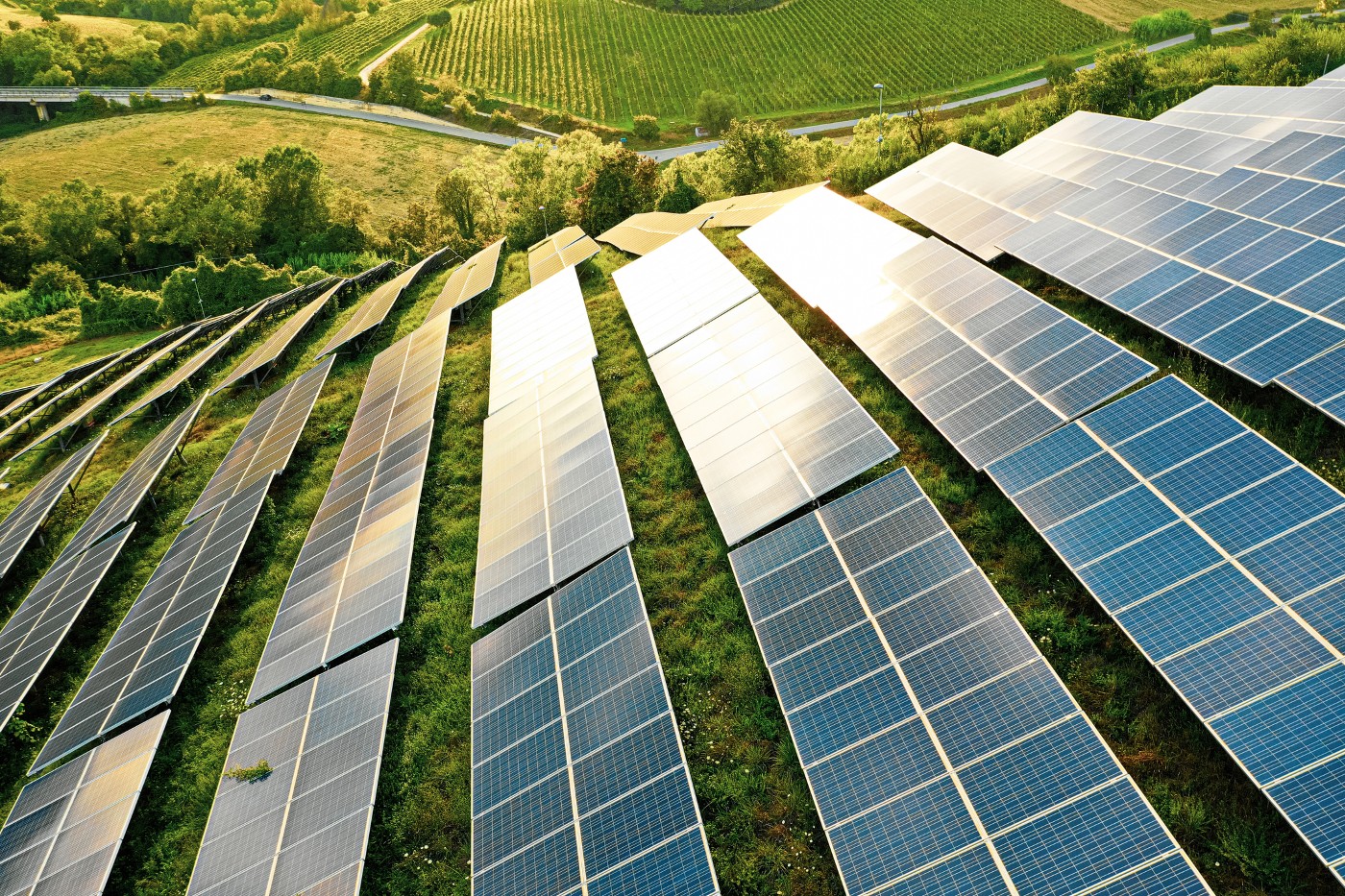 If this were a few decades ago and you heard the government propose a $2 trillion U.S. infrastructure plan, you’d probably race to invest in cement and steel companies.

As an investor, however, you’re stuck in the Eisenhower era if you don’t look beyond those traditional infrastructure beneficiaries. The definition has expanded over the last 30 or 40 years, meaning other industries could benefit, such as fintech stocks, renewable energy stocks, and health care stocks. Not to mention semiconductors, where the United States is short on supplies.

There’s also some reason for caution. Most notably, Biden plans to fund infrastructure in part by raising the corporate tax rate to 28% from the current 21%.

“We think there’s a potential benefit and a potential loss,” said Viraj Desai, senior manager, portfolio construction at TD Ameritrade Investment Management, LLC.* “In terms of winners, the way the infrastructure plan is laid out really benefits the everyday person. Demand for construction and manufacturing [and] the import and export of raw materials as these infrastructure projects generate demand ... could get some incremental lift.”

He continued, “As to how we’re going to fund it, with higher taxes being proposed, it could potentially hurt corporations. However, the corporate tax rate might not go as high as they’re talking about.”

Desai cautioned that we’re a long way from passage, so investors might want to consider waiting until the final stages before assessing possible market and tax impact.

It’s Not Everything You Think: It’s More

Despite being a long way out, it’s natural to wonder which industries could potentially benefit most if a plan goes through.

Maybe it’s not news to hear about proposed semiconductor investment, considering all the ink that’s been spilled on the topic. Still, if you haven’t taken a close look, it may come as a surprise that health care is included. It wasn’t a surprise to health care companies, however.

Consider what we heard on Pfizer’s (PFE) last earnings call. The company, best known these days for its COVID-19 vaccine, devoted some time to discuss—what else?—infrastructure.

“We expect the Biden administration will soon announce a ‘human capital’ component to their infrastructure package that will include health provisions,” said Albert Bourla, Pfizer’s chairman and CEO, on the call. Pfizer is mobilizing to work with the administration, as well as lawmakers in both political parties, on “meaningful solutions for patient access,” he added.

Without burrowing too deep into this one part of possible infrastructure spending, think about possible benefits for health care. In a letter to Biden, American Hospital Association President and CEO Rick J. Pollack said one of his hopes is that the infrastructure bill will expand digital and data infrastructure behind health care, including access to adequate, affordable broadband to enable telehealth and increase access to care.

If you read between the lines, you can see how the health care component branches into other industries, too. These include firms that provide technology—like broadband and data support—that allows companies to connect with the people who use their products.

Beyond Roads and Bridges and into Subsectors

This is a long way from roads and bridges, and it’s also stuff you can’t necessarily get a handle on through the traditional 11 S&P 500 Index (SPX) sectors like Information Technology (IXT) and Health Care (IXV). To learn more about the investment angle, it helps to delve deeper into some S&P subsectors.

Take just one subsector: broadband. This isn’t to say any specific companies will benefit, but keep in mind that President Biden proposed spending $100 billion over the next eight years to deploy broadband throughout rural America. Biden’s plan also promises to reduce the cost of broadband for low-income people.

Considering we started this with a discussion of how the plan might affect a completely different industry—health care—it’s truly fascinating to see how one aspect of infrastructure spending can be connected to many other aspects and different sectors and subsectors.

One way to do a little research into possible sector and company beneficiaries is to visit the TD Ameritrade home page, log in, and under Research and Ideas, select Sectors and Industries. If you’re interested in broadband, choose Information Technology > IT Services Industry and check the Sub-Industry breakdown (see figure 1).

There are 38 companies listed in the category Internet Services and Infrastructure. There are no guarantees which—if any—might get a boost from the infrastructure plan. And at this point, there’s no guarantee a plan will even pass Congress. But if you’ve got a view, or just want to explore your alternatives, this can be a great place to start fundamental analysis.

Check out their recent earnings call transcripts and find some analyst reports (available for every stock in the Company Profile section of the TD Ameritrade site) to see if either company executives or investment bank experts have been talking about possible infrastructure impact on their businesses.

Another thing to consider checking on the TD Ameritrade site is possible tax implications if the plan does raise corporate taxes. This could mean looking at companies’ tax expenses as a percentage of earnings or revenue.

“In some circles, people say that companies which tend to pay their taxes more regularly and consistently probably have higher-quality earnings,” Desai explained. “Look in the quality bucket to see if there are certain companies that can outgrow a rise in taxes with growth in earnings, or find companies that have demonstrated more consistent tax expenses through multiple tax regimes. That will create insulation. Taxes might go up, but they can manage around it.”

Keep in mind, though, that nothing is in stone regarding the tax impact of infrastructure, and some people might be blowing it out of proportion.

“The way the government looks to raise incremental revenues is going to be important in the sense that if they raise taxes too high it could impede companies’ ability to generate income, but that doesn’t look likely to be the case,” Desai commented. “Also, we have very low corporate tax rates now, but were doing just fine with higher ones.”

Is There Room for Latecomers?

You may be thinking that all this is great, but so what? Hasn’t the train already left the refurbished station on shiny new steel tracks? Let’s face it: The tough thing for anyone trying to invest with infrastructure in mind is that a lot of the easy “momentum” money might already have been made.

For instance, when you burrow deeper into the S&P 500 Industrials sector, two subsectors with obvious connections to infrastructure—construction engineering and machinery—saw huge earnings growth in Q1. Some of the big stocks with exposure to those businesses—including Caterpillar (CAT) and Nucor (NUE)—rose sharply during the first half of 2021, easily outpacing the broader S&P 500 Index.

People have also been investing heavily in railroad companies like CSX (CSX) and Norfolk Southern (NSC), trucking stocks like JB Hunt (JBHT), and electric car and battery companies. (Tesla (TSLA) shares have had their struggles recently despite the infrastructure plan’s $174 billion in proposed new spending on electric vehicle technology.) Renewable energy is another industry where most investors know the government is focusing (just as it did after the 2008 recession).

But speaking of clean and renewable energy, this is one sector in which lessons can be drawn from the past in terms of how—and when—opportunity knocks. The short answer: Sometimes it takes a long time for an investment to pay off in real terms (see figure 2).

FIGURE 2: THE ROAD TO OPPORTUNITY ISN’T ALWAYS STRAIGHT. The Nasdaq Clean Energy Index (CEXX) surged in 2008 under the promise of a bright future. But it would be more than a decade later—amid rumblings of more infrastructure spending—before the industry would take off to the upside. But now what? Data source: Nasdaq. Chart source: The thinkorswim® platform. For illustrative purposes only. Past performance does not guarantee future results.

Thinking Outside the Walls

Maybe consider being more creative. Everyone probably knows by now the infrastructure plan has an electric vehicle component, but there’s a lot more to electric cars than the vehicles themselves. Electric vehicles rely on many components made by other companies, including commodities like copper and various types of battery technologies.

Morgan Stanley stated in a note to clients last month that the cement and steel, clean energy, and health care industries will be the top three beneficiaries if the plan passes. The plan could also help bolster the electric vehicle technology industry despite high valuations, according to the company.

Though Morgan Stanley didn’t mention financial firms, the same improved internet connections the plan proposes could help them, too. Fintech (financial technology; for example, checking your statements on your phone) has been an important development for banks, and any new spending by the government to improve broadband and high-speed internet could allow banks to expand their services to more customers. And if there are tax implications, banks that help companies and investors adjust to new tax regimes might see more business.

All this said, there might be some wisdom, as Desai noted, in waiting on the sidelines to see what happens rather than frantically searching for ways to ride the bandwagon (or should we say “broadband wagon”?). Consider that a lot of the momentum money has already changed hands, and that people have been bidding up a possible infrastructure-related rally for more than six months now, basically since the election.

As you might tell your children, you don’t always need the newest and flashiest toy. Instead, consider watching closely over the next few weeks to see how the sausage gets made in Washington, and then try to figure out who the winners might be. Educating yourself and keeping your powder dry is part of every successful investor’s personal infrastructure, so to speak.

Looking to Earn Income from the Stocks You Own? Consider Fully Paid Lending 4 min read Investing in Cyclical Stocks: Has the Pandemic Changed the Outlook? 4 min read The Basics of IPOs: Some Things You Should Know Before Investing 5 min read