Negative Interest Rates Not So Negative for Precious Metals

Gold and silver prices are up sharply this year. Can precious metals continue to hold their own if economies start improving? 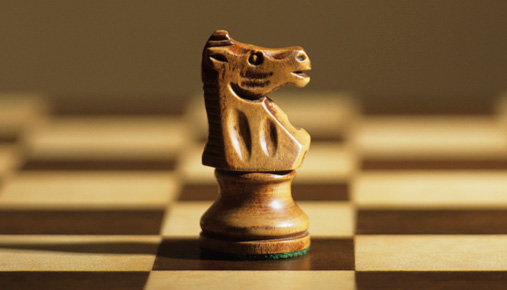 When times get hard, gold tends to glow brighter.

That was true in 1980 when the Fed raised rates to nearly 20% in a fight against inflation, helping send gold to record highs.

And it’s true now even under a very different scenario. Gold prices, along with cousin silver, reached multi-year peaks this summer as many countries faced deflation and lowered interest rates below zero. It doesn’t seem to matter much whether interest rates soar to new highs or plunge to new lows; either way, investors typically want something solid to hold onto when rates start swinging wildly.

“Gold and silver may make sense to many investors as a hedge against a global economic or political crisis, and you can’t really blame them for thinking that way,” said Devin Ekberg, content manager at TD Ameritrade's education affiliate, Investools®.

Can the glitter in metals last, or has it run its course? What happens if interest rates fall even further, or if they recover?

First, let’s take a look at how we got here, with both gold and silver near their highest levels since the spring of 2013.

Gold, Silver a Big Turnaround Story So Far in 2016

Both gold and silver were moseying along late last year at relatively high levels on a historical basis but far below their peaks from earlier in the decade. The Fed’s December rate hike, the first in nearly a decade, seemed to signal more doldrums for gold and silver.

But then a confluence of events gave precious metals a major boost. The U.S. stock market plummeted in January and February, sinking to two-year lows on concerns about weak earnings, sinking oil prices, and a slowing Chinese economy. The eurozone lowered negative interest rates even further, and Japan set its interest rates at negative levels to fight deflation.

Then this summer, the United Kingdom voted in favor of Brexit in late June, a decision seen by some as threatening the financial stability of the European Union. Additionally, the U.S. presidential campaign loomed as one of the most divisive and potentially bumpy in recent memory, and the Fed backed off its plans for multiple interest rate hikes this year.

The U.S. dollar, whose strength had been a big headwind for gold and other commodities in 2015 under the assumption the Fed might raise rates multiple times during 2016, has been more of a tailwind so far in 2016, as “lower for longer” has become “much lower for much longer” when it comes to interest rate policy. Low interest rates tend to keep pressure on the dollar, and metals, like other commodities, historically do better in a weak dollar environment.

Amid all this uncertainty, front-month gold futures jumped from below $1,100 an ounce late last year to above $1,370 by mid-July. Silver followed suit, rising from around $14 an ounce in December to above $20 an ounce in July.

Although multiple factors account for the metals’ rally, negative interest rates are what really stand out, analysts say.

“Negative interest rates are supporting all precious metal prices at this point,” said Matthew Miller, an equity analyst at S&P Global Market Intelligence. “You have recent events like Brexit adding event risk and uncertainty into the market, and obviously gold does very well in that environment.”

Why are negative rates so influential on metals?

“Negative interest rates are a symptom of enormous demand for government debt, much of which is consumed by global central bank demand for bonds in their stimulus efforts,” Ekberg said. “That demand is amplified by additional investors seeking relative safety, and implies a deeply negative outlook on future economic activity.”

As government bond yields move lower (or negative), it puts pressure on their countries’ currency prices, driving them lower, all else equal, Ekberg explained. Because precious metals, a storable commodity, are typically inversely related to currency prices, they tend to rise in response.

Who’s doing the metals buying? “Foreign investors are a factor,” Miller said. “The gold price in a euro-denominated currency is a safe haven investment that’s pretty attractive now to investors.”

So what’s next? Do gold and silver just keep rising as rates fall? Or is there a natural place where they might top out?

Ekberg thinks additional economic factors are in play, making gold and silver able to continue their strength as investors who haven’t looked at metals gravitate toward the products.

“Gold and silver have historically been unattractive for institutional investors because of their negative cost of carry—storage, security, and so on,” Ekberg said. “Now that issue is becoming less relevant as their go-to store of value—government debt—has the same disadvantage. More global institutional demand could drive prices higher.”

Miller thinks gold still could make new highs this year, but senses that the top may not be far above recent levels. And the Fed could also play a role in determining metals action.

“In a scenario where interest rates keep falling, gold prices would continue to go higher,” Miller said. “What puts an unquantifiable cap on the gold price is the concept of the Fed raising rates, but with recent Fed comments, it doesn’t look like that will happen anytime soon, and if it does, it probably won’t be a significant increase. We would not be surprised if gold prices rise above $1,400 per ounce this summer or fall with the backdrop of negative rates and enhanced geopolitical risk.”

By late in July, interest rates had started to show signs of recovery from recent lows. The German bund moved briefly into positive territory, the Bank of England and the European Central Bank decided to keep rates unchanged rather than lower them further, and U.S. 10-year Treasury note yields touched 1.6% after falling below 1.4% earlier in the month. Signs of strength in the U.S. economy, including a solid June jobs report and retail sales, may have played a role in the 10-year yield’s climb.

Even If Economy Improves, Gold May Have Strong Support

What happens to metals if this more recent turn of events persists and interest rates slowly recover?

“If the economy heats up, we think gold prices would suffer,” Miller said. “If you flip the coin and start to see interest rates move higher, especially internationally, that gives the Fed more power to raise rates as well. Ultimately, that’s a scenario where we become more bearish on gold.”

But even then, last year’s lows may remain the trough for metals, Miller said. He sees gold finding hard support between $1,100 and $1,250 in a rising-rate environment, partly because the incremental supply cost of gold would lead to certain mines being shut in at prices below that level. Gold miners have done a good job of cutting production costs and may be able to mine gold profitably even at gold prices between $800 and $1,000, but that wouldn’t be sustainable, he said. 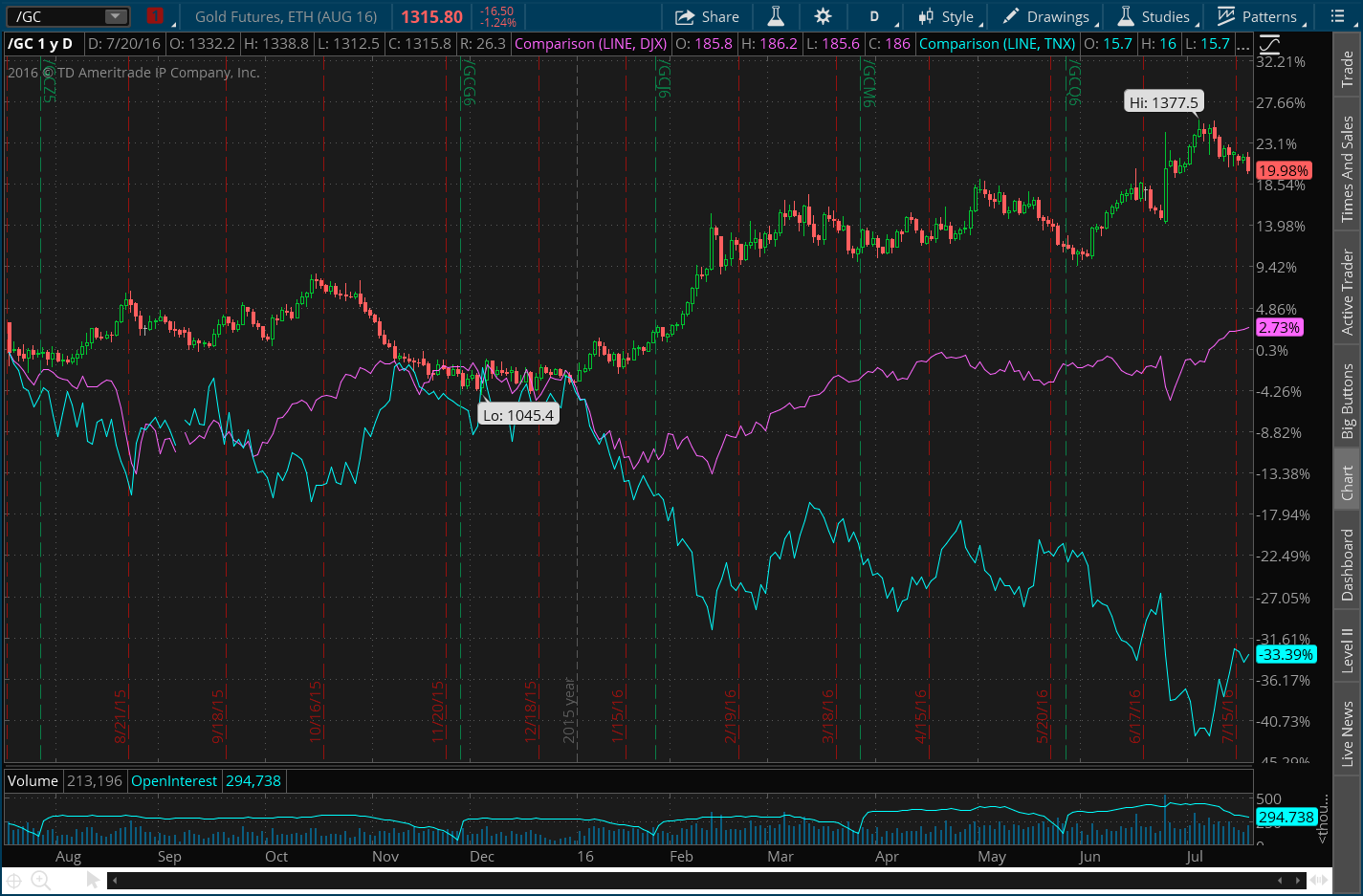 Track Gold Futures and Many More

Track futures like gold, crude oil, silver, equity index, and many others on the TD Ameritrade thinkorswim® platform.

Stay on the edge of the markets »
Print

Silver Investing: Can It Make Your Portfolio Shine? 4 min read How to Invest in Gold? ETFs, Stocks, Physical, Futures, & Options 4 min read What Is a Commodity? Definition & Basics for Investors 5 min read

S&P Global Market Intelligence is separate from and not affiliated with TD Ameritrade, which is not responsible for their services or policies.