Sustainable investing is more popular than ever as we celebrate Earth Day 2017. What can investors do to put more “green” into their portfolios? 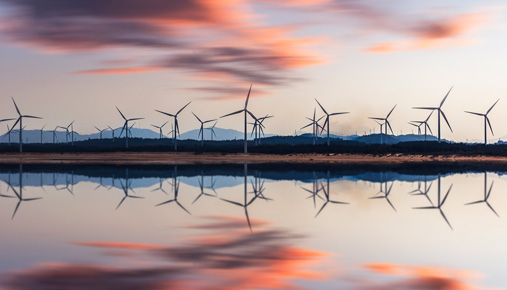 When you hear the phrase “asset protection,” do you think about defensive stocks, fixed income allocation, or maybe even put options? And when you say you want more “green” in your portfolio, does that mean money?

As Saturday, April 22, is Earth Day, perhaps now’s as good a time as any to consider protecting an even bigger asset.

“No matter how old you are or which generation you identify with, there is an increasingly undeniable overlap between our personal lives, our financial lives, and the world at large,” said Deborah Winshel, Global Head of BlackRock Impact, in a recent blog post.

Investors who care about the environment have plenty of choices about where to put their money. Sustainable investing, which includes environmentally responsible investing, has arguably never been more popular. As of last year, investors devoted $8.72 trillion in assets to so-called sustainable, responsible, and impact (SRI) investing, according to a report released in November by the Forum for Sustainable and Responsible Investment, a U.S. foundation. That was up 33% from 2014.

“Money managers and institutional investors are scrutinizing an array of concerns—including climate change, weapons production, human rights, and corporate political spending and lobbying—across a broader span of assets than in 2014,” the report said.

With interest growing so fast, how can the average investor who wants to have less of an environmental impact decide where to invest?

There are plenty of tools online—including at TD Ameritrade—that can help you find companies that align with your core environmental values. Interested in socially responsible mutual funds? You can use our mutual fund screener when logged into your account at tdameritrade.com to search for funds that invest only in companies preselected for their environmental ethics.

Log into the website, click the Research & Ideas tab, click Mutual Funds, then click Screener and Create a Screen. This takes you to the page shown in figure 1, where you can select Socially Responsible Funds so that only these fund types come up in a search result. Investors can further filter these results by other criteria such as caring for the environment. 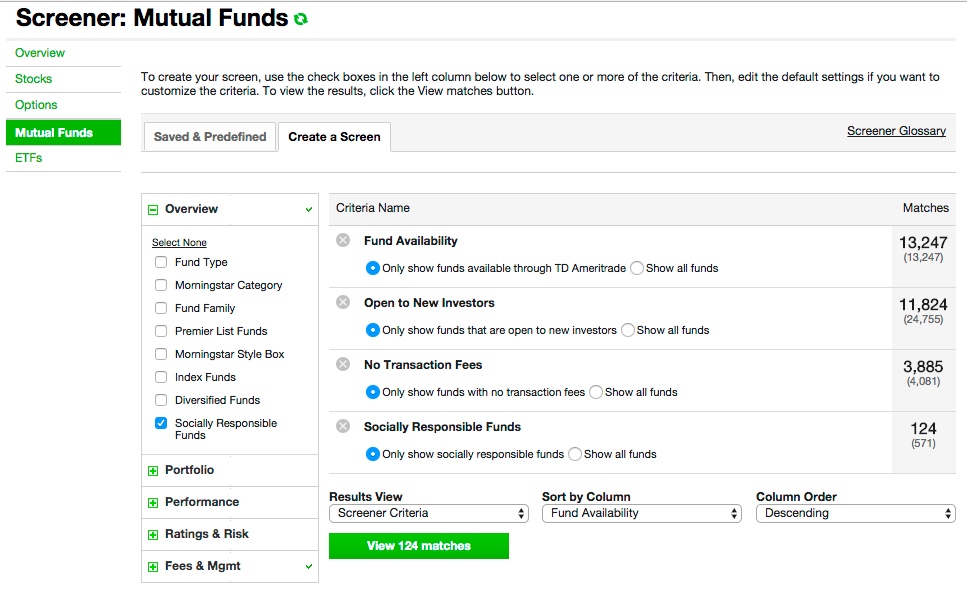 Screening for socially responsible mutual funds on tdameritrade.com. Data and image source: TD Ameritrade. For illustrative purposes only. Past performance does not guarantee future results.

Looking at the list of more than 500 socially responsible mutual funds on the TD Ameritrade website, you may get a sense of information overload. Each fund offers an online prospectus, detailing how it tries to invest in socially responsible companies. But the criteria can vary depending on different fund philosophies, which can be confusing.

For instance, some environmentally sensitive funds won’t invest at all in oil and gas exploration or production companies, citing their environmental footprint. But others may invest in such companies, choosing to reward those companies within an industry that are working hardest to make their operations sustainable. It’s up to you to decide what matters most. Would you rather go the environmental equivalent of vegan (no oil and gas) or vegetarian (some oil and gas is OK if the companies act responsibly)?

Also, the funds on TD Ameritrade’s socially responsible page all have various social responsibility commitments. Some don’t invest in companies that make and market weapons; others don’t invest in companies that put out violent films. With so many different ways to invest “responsibly,” it can be challenging if you really want to focus on the environment to make a selection.

It might also help to look through the list of stock names in each fund. That can be important in establishing whether the fund avoids all companies like oil and gas in general, or just picks some favorites.

How about investing in individual stocks with an environmental bent? In this case, it’s important to examine the companies’ websites, because most have sections devoted to what they’re doing on the environmental front. A typical S&P 500 company’s site often has an entire section devoted to “responsibility,” including environmental responsibility, and many issue annual reports showing their environmental progress against various corporate goals.

Although an oil and gas exploration company would presumably face different environmental challenges than, say, a pharmaceutical company, don’t assume a company can’t take environmental measures just because it’s not in an industry typically thought of as impacting the climate or natural resources. Just about every company has to make and transport its products, so check what they’re doing to reduce their carbon output on both the manufacturing and downstream sides, including using hybrid cars for their sales forces or installing solar panels on their office buildings. Companies typically make their environmental goals and progress easy to find on their websites. And they often extend these goals to their suppliers as well, asking suppliers to take measures that cut back on environmental impact.

Winshel, of BlackRock, calls it “impact investing” when investors target a very clear social or environmental outcome that is measurable and transparent.

“Impact investing targets a very clear social or environmental outcome that is measurable and transparent,” Winshel said. “Instead of just refraining from investing in something that doesn’t align with your beliefs, you’re focusing on companies that are operating responsibly and having a positive impact on the world.”

It may seem like a slam-dunk for an environmentally motivated investor to just put money into companies whose very business revolves around environmental impact, such as solar power or electric automobiles. But even these companies can have various environmental challenges, so don’t give them an automatic pass. Look closely to see what they’re doing to improve.

Already Invested? You’re Not Out of Green Options

What if you’re already invested in a bunch of stocks—perhaps long-term investments you’re not ready to sell—and learn that one of your companies isn’t acting in a way that’s environmentally responsible? Maybe a formerly “green” company got cited for dumping toxic waste in a nearby river. That isn’t common, but certainly there could be less blatant issues, such as failure to meet previously set environmental commitments.

Remember, as a shareholder, you have voting rights. Let the company know what you think, either through your vote or, if possible, by standing up to talk to executives at the next shareholders’ meeting. Companies care what their shareholders think, and if media attend a conference and you speak out, your concerns could get an even wider public view.

Use Stock Screener to narrow selections based on dividends and more. Log in to tdameritrade.com > Research & Ideas > Screeners > Stocks.

A mutual fund is not FDIC-insured, may lose value and is not guaranteed by a bank or other financial institution.

Mutual funds are subject to market, exchange rate, political, credit, interest rate and prepayment risks, which vary depending on the type of mutual fund. Fund purchases may be subject to investment minimums, eligibility, and other  restrictions, as well as charges and expenses.