Scrutinizing financial stocks? Crowdfunding and other alternative funding methods are growing fast, and are even challenging traditional banking. 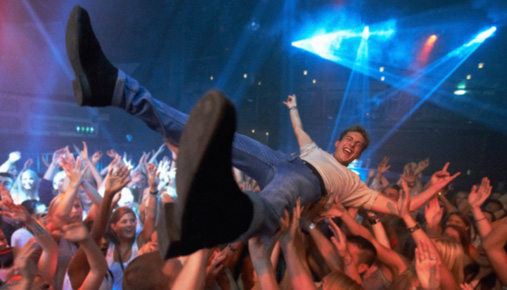 The rapid acceleration of crowdfunding—the latest among potential systemic shocks to the financial services industry—is leaving traditional banks vulnerable to changes that could upend them at their core, though it will likely be years before alternative means of business investment  and peer-to-peer lending change the way we bank.

“Disruptive competitors and dyspeptic regulations will play crucial roles in determining the viability of existing business models in banking,” writes Randall Kroszner, a former governor of the Federal Reserve Board, in a paper presented in March to the Atlanta Fed.

“Technology and regulation will be fundamental forces affecting the viability and business models of banks going forward,” Kroszner adds.

Global crowdfunding exploded 167% last year to reach a mind-boggling $16.2 billion, up from just $6.1 billion in 2013, according to Massolution, which tracks the market. The firm projects that this practice will more than double to $34.4 billion before the year is out.

“While rewards- and equity-based campaigns typically get the most headlines, it’s lending-based crowdfunding that dominates the industry: in 2014, it raised $11.08 billion dollars,” says the firm’s 2015 Crowdfunding Industry Report. North America, which leads the world in crowdfunding volumes, is responsible for raising $9.46 billion, or 58%, of that total.

The World Bank foresees a global crowdfund investing market of $93 billion by 2025, according to its widely quoted 2013 study. That number assumes institutional investors don’t get into the picture, which seems highly unlikely at this stage. Moreover, if it’s compared to the wild progress that Massolution is tracking, that World Bank forecast will be outdated long before 2025.

Despite this mad infatuation with crowdfunding, it’s still in its infancy and has years, indeed decades, to go before it might replace traditional banking, if ever.

Its role as an interloper, however, is not in question.

On June 19, the Securities and Exchange Commission’s (SEC) long-awaited amendment to Regulation A of the Securities Act of 1933 will take effect. (It was promised at the signing of the Jumpstart Our Business Startups, or JOBS, act in 2012.) Called Regulation A+, the new rules will allow startups and small businesses to tap on everyday Americans to invest as much as $50 million in a year through equity, debt, or convertible debt-to-equity deals. It also eliminates the need for state compliance.

That’s an expansive leap from the $5 million businesses are now able to collect annually through online and social media platforms. Individuals can only invest up to 10% of their income or net worth, whichever is higher.

The changes could fuel a boom in crowdfunding, which became legal under the JOBS act, and has become a popular investment-attraction model for equity and real-estate deals.

“However, the SEC broadly defined the term ‘qualified investors‘ under Regulation A+ to allow anyone to invest, albeit with some limitations as to the amount,” says crowdfunding attorney Kendall Almerico in a column for Entrepreneur.

Simply, Regulation A+ allows funds to be raised from the general public, not just accredited investors, as with Regulation D offerings.

Not as Simple as It Sounds

But crowdfunding doesn’t come free, or even cheap, for that matter, and disclosures will be required for what’s being portrayed as mini initial public offerings (IPOs). All that could tamp down the euphoria, say researchers.

Still, Kroszner, now a professor at the University of Chicago’s Booth School of Business, calls this a “defining moment” in the history of commercial banking, and argues that the banking industry may have to redefine itself.

That’s a 180-degree swing that may prove hard to steer, but Kroszner offers this warning: “Commercial banks and central banks are certainly not dead, but technological innovators have them in their sights.”

How Do Bank Stocks Stack Up?

Keep tabs on banking and other financial services stocks through TD Ameritrade’s Stock Screener feature. The tool applies dozens of criteria to help you find results relevant to your goals.