Monitor maturing cloud technology as consolidation dominates a sector occupied by tech powerhouses and as providers look for what’s next in security and data. 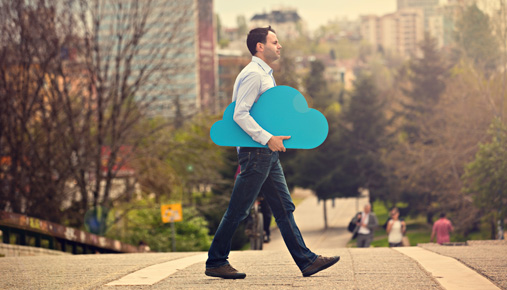 Editor’s note: This is the second in a three-part series on economic drivers that extend beyond short-term data. As we strip the U.S. economy down to its studs, we’re looking to examine hidden cracks and potentially untapped investing opportunities. Here we cover the shuffle for cloud computing technology—our economy’s expanding virtual infrastructure. This follows our look at challenges in transportation infrastructure in part 1. Coming up in part 3: workforce skill shortages.

Labeled one of the biggest economic disrupters ever, “the cloud” has made the must-watch trend lists for several years. Nothing new then, right? In actuality, maturing cloud computing technology may be the real story, one that includes customers as varied as the CIA and the New York Public Library and providers that include blue-chip dividend-payers as well as startups.

Tech executives at companies big and small smell money savings and time shortcuts. Hook-up can be as simple as an Internet connection and a call to a service desk. From there, the cloud can run as an open ecosystem that allows a full range of applications to work together.

But the chief detractor (and the birth of another tech solution opportunity) is a big one: data security. Analysts say growth areas include the ramped-up security protections demanded by nervous businesses, as well as targeted services that extract and bundle data analysis from the cloud. In other words, just providing the architecture is no longer enough.

According to tech news site ZDNET, cloud computing, which essentially cuts the need for high-capital in-house servers and other architecture, is much wider since its inception. The cloud now encompasses everything from apps to data center services to virtualization to software, infrastructure, and platform as a service (cue the alphabet soup: Saas, Iaas, and PaaS).

“It’s ironic, now that our mobile phones are more powerful than entire corporate systems back [in the early 1990s], that we are moving toward the same type of system. Except today, instead of a basement, we have server farms that can be accessed by anyone, anywhere through services like Amazon Web Services, Rackspace, and Microsoft Azure,” says Greg Satell, media and technology consultant and author of the Digital Tonto blog.

“It is that easy—and increasingly ubiquitous—access to incredibly vast [cloud] computing resources that will transform our everyday lives and very well might make the cloud the most disruptive technology ever. It’s not only bigger, but will also be far more pervasive than anything we’ve seen before,” he argues.

Technology consulting firm Gartner in late 2014 predicted the public cloud services market would experience a five-year compound annual growth rate of 17.1% through 2018. That values the market at an estimated $286 billion by 2018.

Giants in the Cloud?

Amazon’s cloud-focused Amazon Web Services has had a target on its back among competitors for years. Investors had been taking aim, too, anxious for real numbers on the commerce company’s business, but Amazon kept cloud revenue under wraps. This April’s earnings report was the first time CEO Jeff Bezos and crew slapped a number on the nearly decade-old operation. Said Bezos then: “Amazon Web Services is a $5 billion business and still growing fast—in fact, it’s accelerating.”

For comparison, Microsoft has a very similar strategy with its Azure offering. It recently reported $6.3 billion in cloud revenues in early 2015, second only to IBM.

Even Big Blue seems to know what its next big move needs to be. IBM CFO Martin Schroeter spoke after the company’s earnings release this spring: “Our cloud revenue was up over 75% year to year. On a trailing twelve-month basis, our cloud revenue was $7.7 billion. We had terrific performance in our cloud foundational and as-a-Service offerings. And we exited the quarter with an annual as-a-Service run rate of $3.8 billion, that’s up a billion and a half in the last year.”

IBM and competitors are moving in the cloud computing space to combine public and private cloud services into a hybrid system. In February, IBM announced a program to extend its clients’ control, visibility, security, and governance in a hybrid cloud environment, similar to the company’s own private cloud and existing IT systems. And to deal with data sprawl, IBM is providing increased data portability across environments.

Some tech companies see the cloud simply as one piece of a big package: hardware, software, and analytics in one, essentially providing companies what they didn’t even know they needed.

Case in point, Google has said in several media interviews that its current place behind Amazon in the cloud market is just fine. That’s because the company is looking to differentiate, focusing on cloud services that include helping customers analyze their data. Data analysis is already at the core of revenue generation at Google.

And likely it’s the cloud that will help businesses deliver on the other big theme of tech: the Internet of things (IoT), which is serving a growing mass of consumers who expect on-demand, speedy, but flexible goods and services.

According to Gartner researchers: “Cloud services and the IoT are proliferating at an unprecedented rate to meet consumer demand and expected experience—for example, based on the Gartner prediction that, by 2020, the installed base of the IoT will exceed 26 billion units worldwide, globally there will be 15 billion networked devices in 2015, an increase from 7 billion in 2010. Therefore, few organizations will escape the need to make products intelligent and the need to interface smart objects with corporate systems. These Internet connections with people, business, and things are generating large amounts of data. Those who conquer the data with analysis can win and disrupt the market toward extreme profits.”

If cloud consolidation and implementation is to move as fast as projected, security enhancements need to be just as speedy. An Oracle-sponsored study from Harvard Business Review Analytic Services found that 62% of survey respondents thought data security issues remain the biggest barriers to expanded cloud adoption at their companies.

There are security systems driven by big data, known in the industry as an “immune-system approach,” that use behavioral analytics to build automated monitoring systems. These find and counter cyber attacks in real time. Other technologies, such as cloud-based data masking or firewalls at the database level, add further preventive layers. And the message to users may be that high-level “immunity” is much safer and potentially cheaper (think economies of scale) than in-house security.

“This is one factor steering many CIOs toward established vendors for cloud services—they have the resources to invest in state-of-the-art security—both physical and logical,” according to the analysis included in the Harvard Business Review study.

As vendors continue to inoculate the cloud with secure migration technology that encrypts data being moved to the cloud, the business case for cloud security could only strengthen.

So even the way that the disrupters disrupt changes in pace and scope. Investors will be smart to always ask what’s next for cloud computing, its big players, would-be competitors, and the enterprising users who see the cloud as their growth engine. This includes the blue-chip techs that compete among each other and increasingly gobble up startups.

Businesses that can adapt to usage are arguably at a competitive advantage, but high-profile financial security breaches and the cultural conundrum over whether faster and deeper access to data is imposing or innovative will continue to challenge our economy’s virtual cloud infrastructure and the companies that build, analyze, and fix it.

Uncover these idea-generators and more »
Print